The 13th Tri-National Conference for the Defense of Public Education took place in Orizaba, Veracruz in Mexico from November 9–11, 2018. Representing OSSTF/FEESO were Vice-Presidents Cindy

Approximately 150 delegates attended the conference, which was the largest number of participants of any Tri-National. Delegations from Canada included the British Columbia Teachers’ Federation (BCTF) and the Canadian Union of Public Employees (CUPE) National. From the United States there were delegations from education unions in Chicago, Los Angeles, San Francisco, Arizona and New Orleans, as well as from the American Federation of Teachers (AFT) the National Education Association (NEA). Delegations from the host country included educators from Veracruz, Oaxaca, the Autonomous University of Mexico and from a number of branch locals of Mexico’s national education union, CNTE. Delegates from Ecuador, Costa Rica, Puerto Rico and England also participated in the three-day gathering.

The event comes on the heels of a federal election in Mexico that saw the incumbent government defeated by a seemingly more progressive political party. Our hosts expressed very cautious optimism that progressive change might be at hand.

OSSTF/FEESO delegates spent extensive time speaking to educators and students about their educational and personal aspirations and, as always, it was a highlight of the trip. Delegates visited an Indigenous elementary school in a rural area and a secondary school within Orizaba.

The OSSTF/FEESO delegation attended workshops and delivered presentations on a variety of subject areas including standardized testing and Indigenous Education initiatives in Ontario. OSSTF/FEESO’s presenter focused on efforts to implement the Calls to Action by the Truth and Reconciliation Commission, and the recent actions by the Ford government to halt that process.

Throughout the Conference, we received updates from a number of jurisdictions regarding the struggles and victories that educators have experiences in public education in recent years. Among the most compelling stories were those from England about their experience with the creation of a Charter School model in their country, and the struggle to maintain a functioning public education system.

Delegates from Arizona talked about their success in mobilizing educators against the Republican government at a time when educators were disengaged from their union and their union was disengaged from them. Chicago delegates told the conference that the battle to unionize charter schools is ongoing. The Chicago Teachers’ Union (CTU) has organized 23 charter schools to date.

Conference participants agreed to a number of resolutions to pursue over the next two years in our respective countries and provinces/states. Delegates committed to strengthening our cross-border solidarity and, where possible and beneficial, to coordinate demands for common language in collective agreements.

A press conference was held at the close of the conference, and the Veracruz delegates were pleased to be able to have international guests standing with them and demanding stronger public education systems in each of our countries. A declaration and series of actions for the next two years will be available shortly.

As the conference concluded, Rob Gascho gave closing remarks on behalf of the entire Canadian contingent. OSSTF/FEESO also received a mural created by students from a school in Mexico that received Federation support after the devastating earthquake in Oaxaca in September 2017. The earthquake destroyed the school, and OSSTF/FEESO provided funds through the Tri-National “Adopt a School” program to begin the process of rebuilding. The Director of the Preschool, Beatriz Gutiérrez Luis, was on hand to present the mural. The Communications/Political Action Department at OSSTF/FEESO Provincial Office is in the process of framing the mural for display.

The next Tri-National Conference will occur in two years somewhere in the United States. 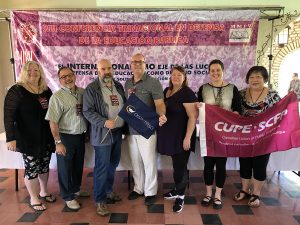